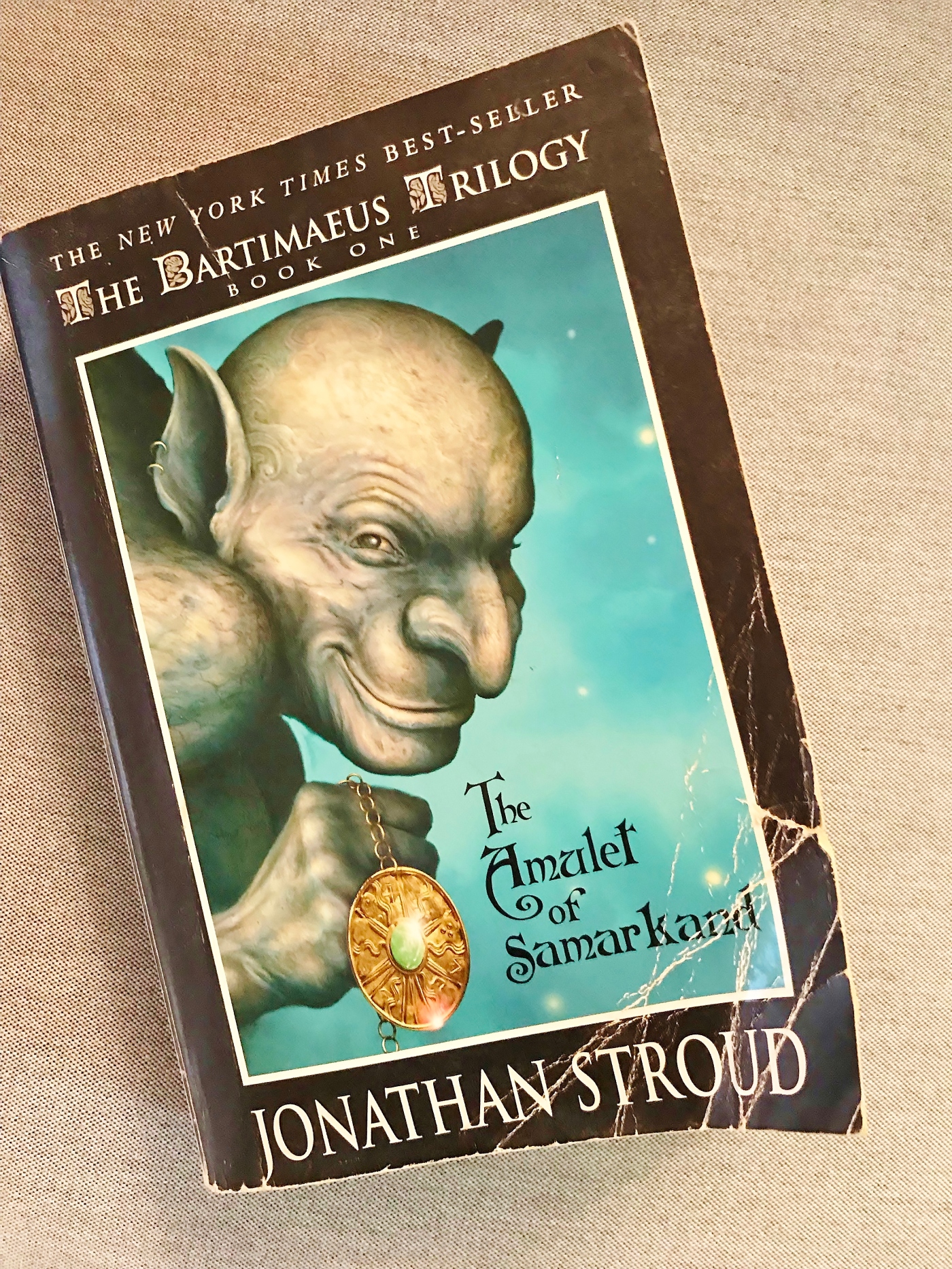 The Amulet of Samarkand by Jonathan Stroud

I’ve decided to start rereading this book because it was one of my favorites as a child, and I was obsessed with Bartimaeus and the idea of a djinni. Now that I’m older, I’d like to read the series over again, this time with a close reading approach.

I want to research their names, the items, the history, I want to know everything. I hope you guys will join me for this journey with Bartimaeus and Nathaniel!

Without further ado, let’s get into discussing chapter 1-4.

We start off with the ever so sarcastic, dry humored Bartimaeus. Oh, how I love this character. I also love his name, it’s a unique character name, so I decided to do some research on it.

According to Wikipedia, that was the name of one of the blind beggars that Jesus healed. Apparently, immediately after he was healed of his blindness, he followed Jesus. He was in a crowd and begged Jesus to help him, so he did. He was rewarded for his faith.

To be honest, I don’t know too much about Christianity or Jesus, but a lot of what I found about the name Bartimaeus stems from that story. I wasn’t able to find much of anything else. I did check out the official website for the book series, and guess what? There’s a Bartimaeus journal for anyone who’s interested, click here.

Anyway, back to the story. The first four chapters are in Bartimaeus’ POV, and it starts off with him being summoned by Nathaniel for the first time. Ah, Nathaniel. So young, so wimpy, yet so in need of revenge. He’s described as “pale as a corpse, shaking like a dead leaf in high wind”. I appreciate Stroud’s use of footnotes for more of an inner look into Bartimaeus’ inner thoughts. Bartimaeus is such a witty character, and Stroud is able to give us information on the “rules” of magic through his quips. For example, he hopes that he’ll get Nathaniel’s name, to “go on when his back is turned”, and in the footnotes, he explains that he can’t do anything while he’s in the circle, but that knowing his name and his weaknesses in his character is something he can exploit.

Nathaniel charges Bartimaeus to get the Amulet of Samarkand from Simon Lovelace and bring it to him when he’s summoned the next day. Bartimaeus protests because he knows that it will be difficult and warns him that Lovelace will come for him. He eventually gives in to being dismissed when he hears the first part of a pain vise/curse.

Our boy goes through becoming a blackbird with an itch on its beak, to a mole burrowing underground. In that time, he checks seven planes and we learn that there are more but, according to Bart, “those who operate more are just showing off”.

He discovers that there are three sentries guarding Lovelace’s home, and has a bad feeling about something lurking on the seventh plane. He becomes a fly and goes through the airvent to Lovelace’s home.

I really don’t want to give such a summarizing type of post, and want to move on to where Bartimaeus takes on the form of someone he “had loved. His dust had long ago floated away along the Nile”. I believe this is a connection to the last book in the series, Ptolemy’s Gate, but I wanted to point out the early foreshadowing here. Already, we’re introduced to a huge part of Bartimaeus’ long, long, long life.

Moving on, he was able to get the Amulet of Samarkand. I had to look Samarkand up, and found that it’s also known as Samarqand, a city in Uzbekistan. Known for being an Islamic center for scholarly study, it is divided into two parts, the old and new. The old city has historical buildings and old houses, while the new city has cultural centers and educational institutions, thank you Wikipedia. I really had no idea this was real place, but I was always in love with the word, Samarkand…I know I’m weird.

Moving on, Barty runs into two “old friends” who have been summoned by Lovelace to guard the amulet. The first one is Jabor, who is described as being a very tall man, with red skin, and the head of a jackal. That description really freaks me out, to be honest. Having flashbacks to the buffalo (or bull?) headed man in American Horror Story: Coven. Jabor so far, is described more for his strength and thirst for a fight. He is continuously throwing detonations, even though it’s obvious a seal has been placed, and there won’t be any effect. Bartimaeus describes it as “unimaginative”. Another reason to love him.

The other acquaintance he runs into is Faquarl, who is in the form as a jovial cook with a meat cleaver in his hands. What a look. On the seventh plane, Bartimaeus realizes it’s him and won’t meet him in the seventh plane, stating he “had too many tentacles for my liking”. I really need to get some lenses to see all these damn planes. Sorry, went to far into the book.

After some banter, our boy unseals the door and Jabor hits Faquarl with his detonation by mistake, giving Barty time to escape. Before they can get to him, our boy is long gone.

And that’s what we’re going to cover for this first post. I think for my next post, I’m going to try and organize it better, maybe summary first and then talk about the names and characters. Bear with me, this is my first book review. Like I said before, this is one of my favorite series, and I would love to talk to you guys about it.

Have you read this book/series already? What are you thoughts on it?