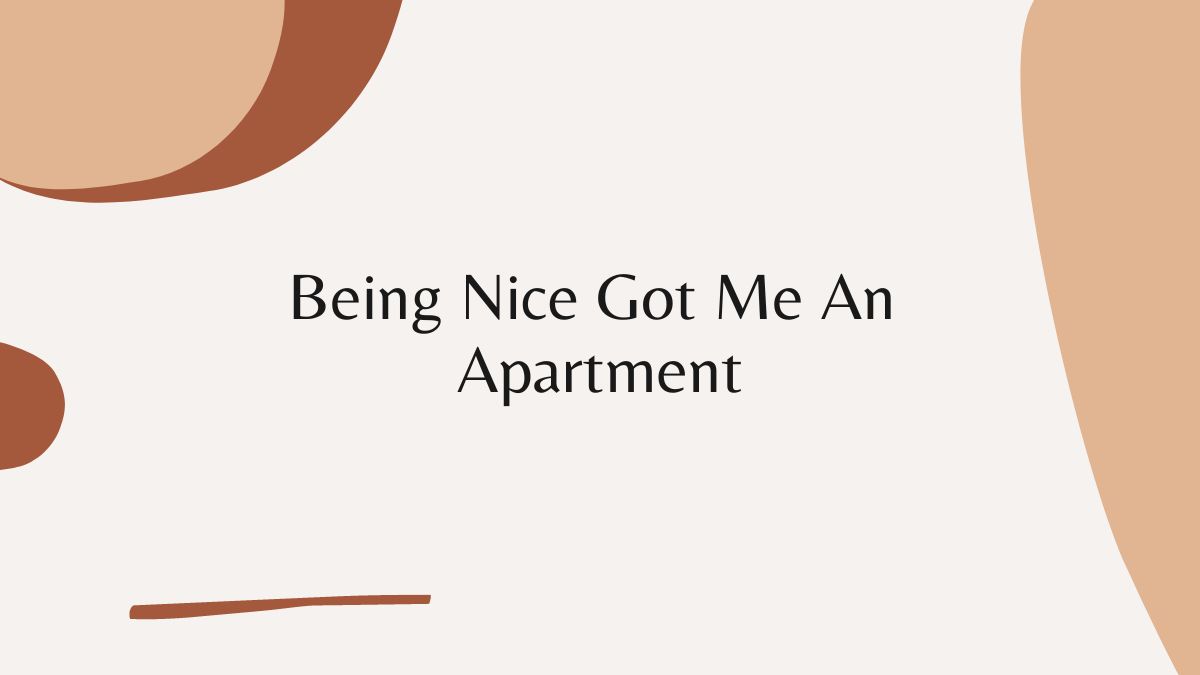 If you’ve been reading my last few posts, you would know that I’m moving to another apartment. If you’re not caught up, check this past blog out about what’s been going on.

In that blog, I mentioned that I didn’t quite qualify with the financial requirements needed to be approved for the apartment I wanted. Yet, somehow I got approved…and I’m pretty sure it was because I was super nice to one of the leasing agents.

I had made an appointment to tour the apartment, get pricing, etc. I arrived a little early and noticed another party of two people had also arrived early and were waiting by the front door.

I could tell these two people were frustrated. No one from the apartment leasing office was here yet and the door was still closed. I was in a good and talkative mood, so I asked the frustrated strangers what was wrong.

They said they were new residents, who just drove in from Louisiana. They did not have the keys to the apartment and they had a new bed frame, mattress, and camera delivered to the new apartment the previous evening.

Only problem was, since they were in Louisiana, they needed the leasing office to bring in their stuff. The girl said she didn’t hear from the leasing office when she asked if the items arrived and nothing was in front of their apartment door. She made it seem like she had told the leasing office ahead of time and no one responded to her. As a potential new resident, this was quite alarming and had me rethinking if I wanted to live there.

The leasing manager arrived and immediately the other party starts raising their voices at her and are understandably frustrated that thousands of dollars of items are not there.

The leasing manager reveals that they only contacted the office after hours yesterday, and they didn’t even sign the lease agreement. Now, I definitely feel bad that the other people lost money and their items, but we need to instill some common sense here.

If you haven’t signed the lease agreement, the apartment isn’t yours and the leasing office can’t legally bring stuff into an apartment that doesn’t have you listed as the tenant. Also, if you were ordering expensive items to arrive, when you knew you wouldn’t be here in time, why would you contact the office the day the items arrive, after hours?

I felt bad for the people, but the leasing office was definitely not at fault. You can literally e-sign the lease, but the woman had wanted to do a walk-through when she got here before she signed the lease.

Anyway, the atmosphere was tense and the leasing agent asked me I could come back in 20 minutes because the woman wanted to do a walk through of the apartment with the agent present. I mean, I could’ve made a fuss, I had an appointment made two weeks ago…but she was already dealing with an issue and I really had nothing to do, so I left. I was in a good mood, it was a Saturday, I had a latte and enjoyed my 20 minutes.

I came back and it looks like the woman and the person she was with just signed their lease and they were still being rude to the agent. After they left, the agent apologized to me about making me wait and I told her I totally understand and was as empathetic as possible.

I honestly felt bad that she had such an awful start to the morning and wanted to be a kind and positive part of the day for her. I was super nice when asking questions, we joked a little bit, and hit it off for the most part.

When I got home and started looking at their apartment brochure, it had the requirements of either making 3 months of the rent in a month or having 12 months of the rent in your account right now. I did not meet either of those requirements. Luckily, I’m an optimist and decided to apply anyway and just see what happens. I paid the non-refundable application and admin fee and waited for two days…and I GOT APPROVED!

I was and am super excited, but was initially shocked that I got approved. I didn’t meet the requirements and at first another leasing manager was emailing me for my proof of employment and stuff like that and then they emailed that I should be hearing from the leasing agent I met in person. She was the one who got me approved! I think it was definitely me being nice and wanting her to have a positive experience after basically being verbally abused.

Have you guys had situations where just being nice paid off, even if you weren’t looking to get anything out of it?