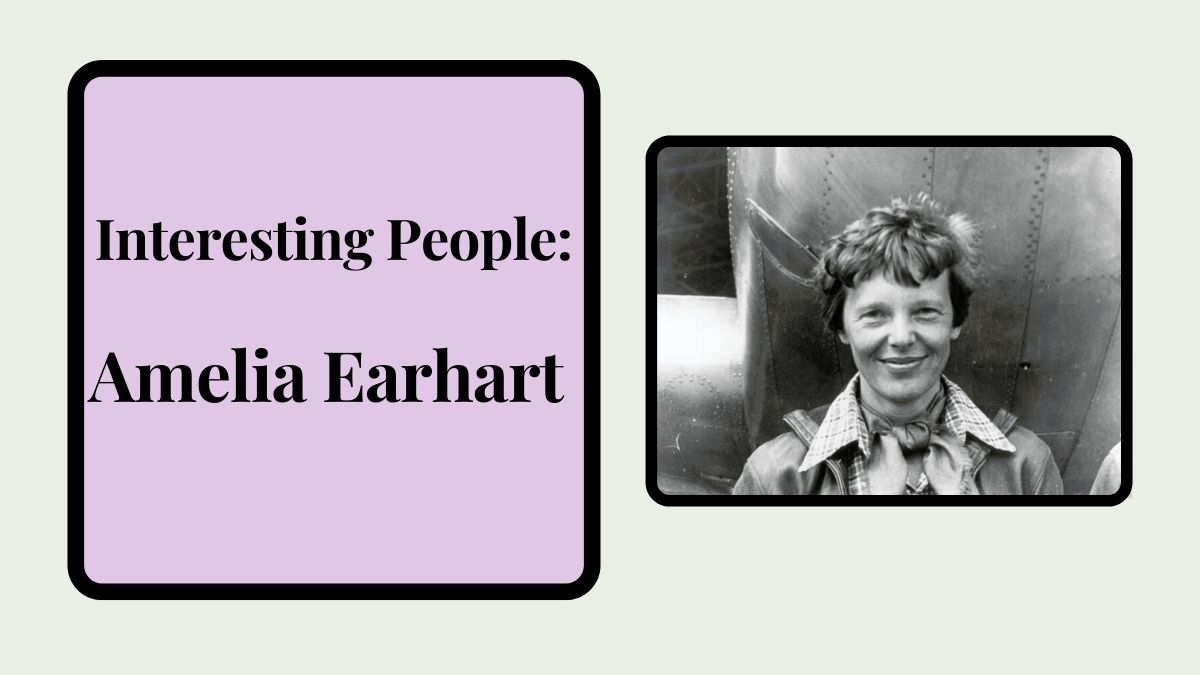 I wanted to discuss Amelia Earhart today. Why? Because why not? I’ve been obsessed and intrigued with her story and what happened to her ever since I learned about her in third grade. She was one of the first women I ever learned about in school, and just the dedication she had and the mystery around her disappearance always kept her on my mind.

If you don’t know who Amelia Earhart is, in a very quick summary that does not do her justice, she was the first woman to fly a plane solo across the Atlantic ocean, she was an author, a supporter of the Equal Rights Movements, and a huge figure in aviation. She was all about beating records and decided to undertake the record to be the first woman to fly around the globe and the navigator, Fred Noonan, a navigator, accompanied her. They were on the final leg of the trip, and departed Lae, New Guinea on July 2, 1937. This was the last time Earhart and Noonan were seen. If you’re curious about her life, here’s a link from History about her.

But, Earhart and Noonan were heading to Howland Island. The last reported position was at the Nukumanu Atoll, which means they most likely did not make it to Howland Island. Below is a Google Map screenshot, because I had no idea where these places were located. So their plan was to go from New Guinea to Howland Island, but most likely ended up somewhere around Nikumaroro Island, which was called Gardner Island in that time.

I was listening to the podcast Conspiracy Theories, and they discussed in depth a few of the major theories about what may have happened. If we go with the most obvious theory, the plane ran out of fuel and Amelia and Fred Noonan, died at sea. This is the most logical theory, but there were multiple radio transmissions heard in different areas seemingly from Earhart.

Apparently, people who were in the military, listening for any sign of her and Noonan, heard her final messages. But, regular people who happened to be listening to the radio at the perfect time, claimed that they heard other messages from her, asking for help. I don’t quite understand radio transmitter wave lengths, but this is one of the articles that describes how her message may have been able to been heard clearly by other people with a normal radio from a far distance. From the articles I’ve read, it seems that it was people in the U.S. who reported hearing her. Someone in San Francisco heard, whom they believed to be Earhart say “Still alive. Better hurry. Tell husband all right” over the radio frequency. People in Canada and Kentucky also reported hearing her plead for help over the radio. This is one of the articles that discusses those messages. It’s so eerie to think about. But, the U.S. Navy did not find the messages credible, so that it why the official story is the plane crashed somewhere in the Pacific Ocean and sank with Earhart and Noonan.

If we go with the idea that the messages over the radio was Earhart and she did somehow survive, what then? Well, so far I’ve run across two theories. The first theory is that they did make it to Gardner Island/Nikumaroro and passed away as castaways, with no drinkable water, food, possibly injured, etc.. In 1940, bones were found on the island but it was decided that the bones were male and not Fred Noonan’s because of the height. But, with the advances in technology and the knowledge we now have, anthropologists believe that there’s a chance the bones could’ve been a woman’s skeletal remains. Other evidence that have been found on the island, though not proven to be Earhart’s or Noonan’s, are a woman’s shoe, a sextant box (measures horizontal and vertical angles, similar to a nautical instrument), and smaller items like a cosmetic bottle.

Another theory, is that they landed in Mili Atoll in the Marshall Islands. There are witnesses who claim to have seen the crash. You can read more into that here, but there was no evidence to deem this a fact. When I was researching this, the strangest thing is that on the 50th anniversary of Earhart’s disappearance, the Marshall Islands created stamps with her face and showing the plane on the island. You can check them out on the previous mentioned website, but what a strange thing to do.

There are so many more theories about Amelia Earhart’s disappearance, but these seem to be the main ideas. Personally, I think it was the theory that Earhart and Noonan did land on Nikumaroro Island and they died as castaways. The reason being is the evidence of the body and the objects found. The island was thought to be uninhabited and even though items wash up on shore, those seem very specific.

What do you guys think? I’d love to know your thoughts on Amelia Earhart! Or if you have any other mysteries you want to discuss, let me know!